Nine sommeliers of the most luxurious hotels of United Arabs Emirates participated in the competition. The competition was quite tough, because all competitors were very good and professional and did a great presentation. However, the winner turned out to be Mr. Rajan Rengasamy in Dubai who works for the Armani Hotel.

Mr. Rajan will represent the United Arabs Emirates in the annual Worldwide Habanosommelier Competition in February 2011 at the 13th Habanos Festival in Cuba.

The trophy was presented by Ms. Nerissa, winner of the past year, who also won 2nd place in the international competition at the 2010 Habanos Festival in Havana, Cuba. 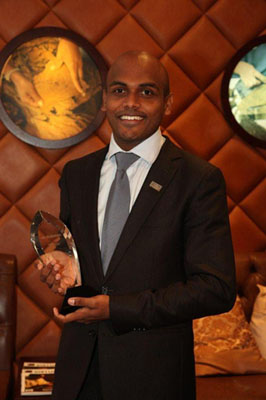